AN INTERVIEW WITH GODDESS TONI TINKELMAN

When a group  of obsessive Goddesses from Malibu, form a support  group, it appears that  they are really getting their acts together. We soon discover that the head Goddess Luella is harboring a huge secret in her bedroom.

As the Goddesses work on becoming better versions of themselves based on the spiritual teachings of Wayne Dyer; they are shocked to discover the mistress of their club is out of her mind and in a frenzy of obsession, kidnapped her long lost love to resolve their conflicted relationship.

Goddess Sky  turns out to be a new woman to the group when she shares that that she recently had a male to female sex change operation and African American Goddess Queen Lee  a  tell it like it is Goddess, with  comical sparks flying every time she opens her mouth. It takes the Super Head Cheese Goddess Shabeth to get them all in line!

It is  a funny story that any woman who's been pushed over the edge by a man can relate to. Their interactions are delightful and all the ladies brought their own special level of funny Goddess to the show. Of course, we wonder, did Phil really learn his lesson?

A special thank you to Rhoda Pell, Roberta Bassin and Cammie Middleton for participating in the Zoom reading for GI !

The Play - written, directed and produced by: Marguerite Fair

Marguerite Waits for Phil to get to the Interview

Live for a one day fund raiser at SpiritWorks Center in Burbank, CA June 2013.

Phil has his hands full running away form Luella, Cora and Sky! 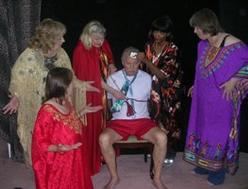 Cynthia Russell and Audrey Mitchell on set for Rehearsal

Audrey Mitchell as Goddess Shabeth on Set for Rehearsal

'Goddess Intervention' was produced  by Marguerite Fair at  the SpiritWorks Center Stage in Burbank, CA in 2013.  It was a successful one day fundraiser starring Cal Bartlett, star of The 'Virginian' and recently The TV mini-series 'The Spoils of Babylon.' The audience members fell in love with all of the zany and hysterically funny cast pf Goddesses, as for Phil, well he needs to be very clear about his intentions. 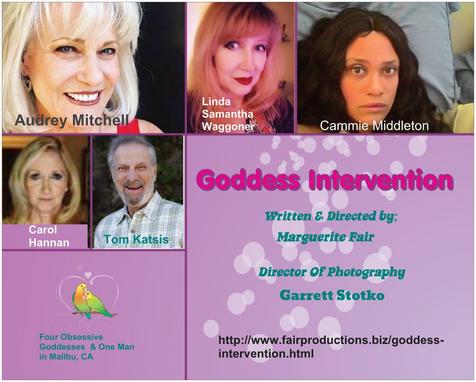 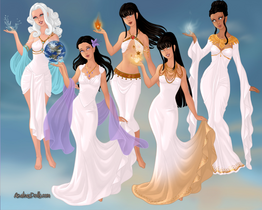 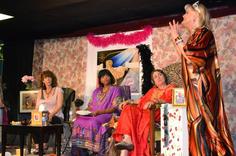 Thank you to everyone who worked with me so hard in trying to put this up! We will get it done!

It can now be seen on The Laugher Talks Youtube Channel.

Due to the pandemic, financing  and scheduling changes, this film will be made at a later date. Thank you for  your understanding! 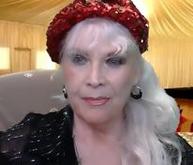 Once a Gddess always a Goddess~